No, eating sushi made with raw fish is not safe during pregnancy! But that doesn’t mean all sushi is off-limits! There are types of sushi pregnant women can still safely enjoy. 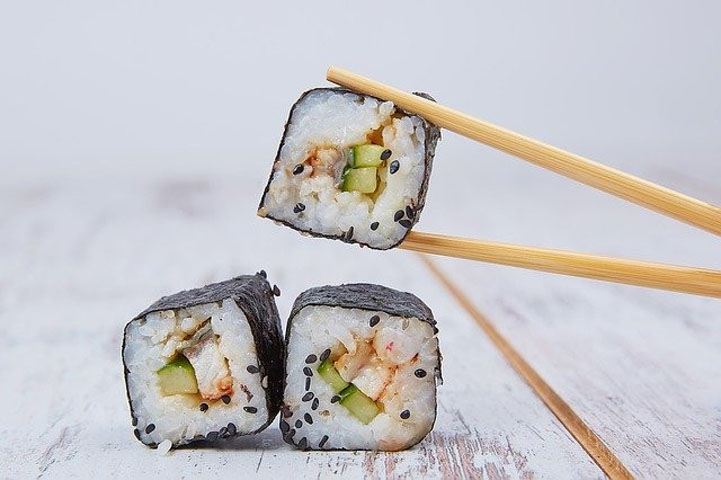 Is it Safe to Eat Sushi During Pregnancy?

Although most foods and drinks are safe to have during pregnancy, it seems like every day, another one of your favorite dishes gets on the ‘bad’ list. So, what is the deal with the sushi?

Why is eating certain types of sushi safe in pregnancy? And even more important, why is sushi with raw seafood such a big no-no for a pregnant woman?

Sushi is, unfortunately, one of the foods you should avoid in pregnancy. But is it really so dangerous for a pregnant woman and her baby? That mostly depends on its ingredients and method of preparation.

Therefore experts recommend that it is better to avoid sushi during pregnancy! However, you can still try the fish-free sushi version or the one with cooked fish. For example, avocado or pickle sushi rolls are fresh, delicious, and above all, safe!

RELATED: What foods to Avoid during Pregnancy?

Is sushi from pre-frozen fish safe for a pregnant woman?

Some believe that eating sushi from a previously frozen raw fish is safe during pregnancy. Although sufficient freezing kill parasites, that is not the case for all bacteria, so they didn’t convince me. If there is still a potential risk, it’s better to avoid it during pregnancy!

If your cravings for raw-fish sushi during pregnancy are so big, eat only the one that you have made by yourself. Also, buy the fish from a trusted source.

Freeze the fish for at least four days before using it, defrost it in the fridge, and use it straight away. That will kill potential dangerous pathogens, but remember that the risk for bacterial infection remains.

What sushi should you avoid during pregnancy?

Avoid sushi with any raw or undercooked seafood!

According to the FDA guidelines, the sushi made with fish that are high in mercury is off-limits in pregnancy, even if the fish is cooked!

Eating sushi in pregnancy may cause severe problems

Eating Sushi in pregnancy can cause Listeriosis!

Although listeria is more commonly present in unpasteurized milk, dairy products (raw milk, fresh cheeses with mold), and poultry, it can be in seafood as well.

Listeria usually doesn’t cause significant problems in a healthy adult, but it can be problematic in pregnancy. But, due to changes in their immune system, pregnant women are more susceptible to foodborne illnesses such as listeriosis.

If a pregnant woman gets listeriosis, it can pose a severe health risk for her and her baby. Listeriosis causes vomiting and diarrhea. Though, if the bacterium also infects the fetus, the consequences may be more severe.

Listeria can cause premature birth, miscarriage, or stillbirth. Additionally, a baby infected with listeriosis can be born with various severe health problems.

Eating sushi made of large fish can expose fetus to higher mercury concentrations.

Exposure to high concentrations of mercury jeopardizes the health of the baby and pregnant woman. High levels of mercury are particularly dangerous for the baby. Mercury is a toxic metal that can cause brain damage, deafness, and vision problems.

Undercooked seafood, especially shellfish, may contain the parasite Toxoplasma gondii, which is particularly dangerous in pregnancy.

Toxoplasmosis is an infection caused by a parasite called Toxoplasma gondii. This parasite can live in the human body for a very long time, possibly even for a lifetime. Because of a strong immune system, healthy adults rarely got sick.

But it is a different story in pregnancy. The disease is usually not dangerous for the pregnant woman, and often she doesn’t experience any symptoms at all. However, if the infection is transmitted to the fetus, it can cause miscarriage, stillbirth, premature birth or the newborn has serious health problems (mental impairment, visual and hearing impairments ).

Which sushi rolls are safe during pregnancy?

I have to point out that not all fish pose a health risk during pregnancy. In fact, adding certain fish to your pregnancy diet is very healthy, but not eat raw or undercooked ones!

Fish are a great source of protein and omega-3 fatty acids. They are rich in vitamins B12 and D and also provide a lot of minerals, such as iron, selenium, zinc, and iodine.

Food and Drug Administration (FDA) encourages moms-to-be to eat two to three servings (8 to 12 ounces) of low-mercury fish per week.

Sushi made with well-cooked fish that is low in mercury is perfectly fine to eat while pregnant. Fish should be cooked to an internal temperature of 145 F (63C), to kill all potential parasites and pathogens!

Pregnancy is a time to pay extra attention to your health. Your immune system is suppressed during pregnancy. That is how it should be, as it prevents the body from attacking your growing baby.

However, as such, your body is more susceptible to disease, including foodborne illnesses. That is why you have to take care of yourself and pay attention to what you eat.

Sushi is one of the riskier dishes during pregnancy, so always find out its ingredients before consumption. Or even better, prepare it by yourself, with the foods that are safe during pregnancy!

Always talk to your healthcare provider, before you try something you’re not sure if it’s safe during pregnancy!